Are you planning on refinancing your home?  If so, you could lose protections from creditors under bill at Legislature

Homeowners who refinance their mortgag 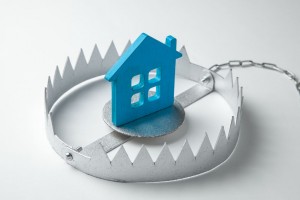 es could lose protections from debt collectors and other creditors under a bill that’s quietly making its way through the Arizona Legislature.

Critics say that and other provisions could harm homeowners struggling to make ends meet, and the legislation might force debtors to seek additional legal help on old bankruptcy cases they thought were closed.

But House Bill 2617 also could help some consumers, including those in good financial shape, by increasing the amount of creditor protection that all Arizona homeowners receive automatically.

Arizonans currently are shielded from creditors on the first $150,000 of equity in homes they own and live in, thanks to a special provision in state law that’s designed to keep people from being thrown out on the streets. This blanket protection  of a person’s home investment would rise to $250,000 if the bill passes.

This special, automatic creditor protection is known as the “homestead exemption,” a legal shield that exists in nearly all other states, though in varying amounts. It protects a certain amount of a person’s investment in a home, whether a single-family house, condominium, mobile home or another type of dwelling.

The exemption has existed in Arizona for more than four decades, and the Legislature has increased its value many times over the years, providing more protection from creditors.

“The policy of this (long-standing)  consumer protection law is that no family should lose its shelter, which is necessary for their survival and ability to work,” said Phoenix bankruptcy attorney Diane Drain.

The idea was to protect homeowners and family farms, but the exemption also has been a “source of frustration for creditors and creditors’ attorneys,” noted a 1997 State Bar article.

At $150,000, Arizona already has one of the higher homestead exemptions, according to Asset Protection Planners, though eight states including Texas and Florida offer unlimited protection. Several others including California, Nevada and Massachusetts  shield homeowner equity at or above $500,000.

At the other end of the spectrum, New Jersey and Pennsylvania provide no homestead exemptions, while Virginia and Kentucky allow just $5,000.

Drain said increasing the exemption from $150,000 to $250,000 is a welcome provision that would strengthen homeowner protections, especially as Arizona housing values have risen and more people are pinched financially by COVID-19 disruptions.

But the bill has several problems, she said.

One is that it would allow “judgment” creditors – those that have won a lawsuit following an accident, for unpaid medical bills or something else – to grab proceeds from a mortgage refinance. Another is that it would turn any existing court judgment  into a lien on a person’s home, automatically and retroactively.

That would undermine  “the protection a debtor has under the current homestead• exemption statute,” Drain wrote in a commentary. She called it a “terrible” idea that would “drastically impact all homeowners who are facing financial turmoil.”

It even could hurt other creditors by dropping them to a less-favorable position or rank for claiming debtor assets, said the William  E. Morris Institute of Justice, in a commentary. The Phoenix organization predicts a “significant amount of litigation in both Arizona courts and federal courts” and potential “chaos” in Arizona’s bankruptcy system.

In fact, the legislation would allow judgment creditors to have first dibs on proceeds when a homeowner refinances his or her mortgage.

That provision would create “a new right for judgment creditors to receive proceeds otherwise exempt” in the case of a refinancing,  said the Morris Institute. “The bill effectively eliminates the homestead exemption by creating an exception to its application in the event of a refinance,”

The legislation not only allows creditors to seize refinance proceeds but requires them to be paid before the homeowner gets anything. (This would apply on future refinances, not those already closed, Drain said.)

‘You still have to pay your bills‘

But proponents counter that struggling homeowners  shouldn’t be allowed to game the system by tapping into home equity and using the proceedsfor living expenses or for other purposes,  rather than paying creditors.

People who pay their bills and refinance to obtain a lower interest rate or lower monthly payments wouldn’t be negatively affected, and all homeowners would benefit from the increased exemption amount to $250,000, said House Majority Leader Ben Toma, R-Peoria, who sponsored the refinancing  amendment.

But others who owe judgments and haven’t paid them couldn’t  refinance and take the cash while keeping creditors at bay.

”You still have to pay your bills,” Toma said. “We’re not trying to protect that.”

Tucson attorney  David Hameroff agrees. “Remember, the person or small business that is owed money may also be cash-strapped as well,” he said in an email.

He’s president  of the Arizona Creditor Bar Association, one of the parties  supporting the legislation. Arizona bankruptcy attorneys  are among those who oppose.

But creditors already have other ways to collect on debts, Drain countered, including forced auctions known as “sheriffs  sales” or by garnishing  wages and bank accounts. Also, the homestead exemption  doesn’t shield a homeowner from needing to pay child support, alimony or tax liens, she noted.

At any rate, it’s an important caveat for homeowners who seek out new mortgages. Refinance activity is brisk lately, accounting for 72% of all new-loan applications taken out by Arizonans in February, the most recent month tracked by the Mortgage

Bankers Association. The report didn’t state why most Arizonans refinance – to obtain a better interest rate, lower payments, tap cash to pay bills or something else.

Despite its complexities and controversial nature, the legislation sailed through the House without any dissenting votes. It now awaits action in the Senate, where it was approved in modified form by the finance committee. Lawmakers currently are working to iron out differences between the House bill and a more detailed Senate version.

The bill also could cause problems for people who already thought their bankruptcy cases were closed, critics say.

The legislation including the retroactivity provision could result in the reopening of thousands  of bankruptcy cases in which debts were discharged with the homestead protections intact, critics contend. Arizona bankruptcy court judges long have held that liens can’t be attached to a debtor’s homestead amount and thus aren’t relevant in a bankruptcy case.

But if the legislation is enacted, “Thousands of bankruptcy  cases will need to be reopened at a substantial cost to the homeowner to obtain a court order avoiding a lien that did not exist at the time of the original bankruptcy,” said the Morris Institute.

Drain agrees. “This will be a huge expense to debtors, as this is a complicated process that will require them to hire attorneys.”

Arizona has logged nearly 350,000 bankruptcy filings since 2005 – the vast majority by consumers and small businesses. That statistic, derived from data compiled by the U.S. Bankruptcy Court in Phoenix, doesn’t say how many involved homeowners.

There might not be any warning to a homeowner, prior to signing refinance documents, that creditors would receive all proceeds to satisfy a debt before the borrower gets anything.

“The end result is the homeowner  cannot make the necessary repairs on their home or pay their essential expenses while struggling financially,” Drain said.

Reach the reporter at russ.wiles@arizonarepublic.com.

My favorite client, or prospective client, is someone who wants to learn as much as possible about their situation, so they can make informed decisions. Finances are confusing and everyone needs to take time to determine the best way to find a solution that works in the long run, not just today. Never rely on the Internet for advice – there is more bad advice than good. Always seek advice from at least two people who are experienced in the area you need help. Once armed with good information, then use your common sense to decide what is best for you.

Be very careful when exposing your home to your creditors.  As laws change (they do all the time) your rights also change.  Yet, you will not know about the change unless you continue to investigate.