ARIZONA IS ONE OF 2 STATES THAT WILL TAKE YOUR TAX REFUND IN BANKRUPTCY.  SHOULD THE LAW CHANGE?

ARIZONA IS ONE OF 2 STATES THAT WILL TAKE YOUR TAX REFUND IF THIS HAPPENS.  SHOULD THE LAW CHANGE?

By RUSS WILES, Arizona Republic (reprinted for educational purposes only)

Tens of millions of Americans look forward to income-tax refunds as a way to pay down debt, buy necessities and otherwise get their finances back in order. For many people, refunds represent the largest one-time payment they will receive all year.

‘We’d use it to buy clothing, shoes and stuff the kids might need like school uniforms for the coming year,’ said Kyle Hebenthal, a 38-year-old truck driver who lives in Surprise with his wife, Suzanna, 36, and their two kids.

But Kyle and his family won’t receive their refund money this year.

Current state law precludes debtors like the Hebenthals from receiving tax refunds if they recently filed for bankruptcy before getting the funds. Arizona is one of just two states, along with Montana, that diverts refund money to creditors and for use in meeting bankruptcy-administration costs, said Chandler bankruptcy attorney Kenneth Neeley.

A bill before Arizona lawmakers, Senate Bill 1222, would change that by exempting federal tax refunds from the list of personal assets used to pay off debts. The legislation passed the Senate on a bipartisan vote and awaits a vote in the House.

Neeley, whose firm is representing the Hebenthals, said he supports the measure as a means to give debtors a fresh financial start. But critics contend the measure could mean fewer creditors, large and small, would be paid in full — if at all.

The two key types of federal tax breaks that drive up refunds for moderate-income taxpayers are the earned income tax credit and the child tax credit. The EITC, in particular, is viewed as a major federal anti-poverty program.

This tax break was claimed by 555,000 Arizona households in 2020, the most recent year for which the Internal Revenue Service has disclosed numbers. The average amount was $2,478.

Also, the IRS paid advance child tax credits averaging $462 to 795,000 Arizona households last year. The advance payments were a special program for 2021 designed to provide pandemic relief to households before they actually filed returns for the year.

The Hebenthals, who filed for Chapter 7 bankruptcy protection in January, said their financial woes mounted when they separated last year and she lost her job for about six months. The split ‘basically meant maintaining two households,’ she said.

Bankruptcy filings are designed to help people restart their financial lives by removing many types of debt. Those going through the process need a little money to get back on their feet, and that’s where tax refunds could help.

With ‘fresh start’ Chapter 7 proceedings, people filing for bankruptcy generally must turn over just one year’s tax refund, Neeley said. But in Chapter 13 debt-reorganization cases, debtors could lose their tax refunds for up to five years, he added.

Neeley said he didn’t think the proposed bill is really a partisan issue, except when special interests get involved, citing banks and debt buyers who he said often purchase IOUs for pennies on the dollar and aren’t the original creditors.

When tax refunds are accessed by a bankruptcy trustee, roughly one-third of the money on average will go to pay court administration costs and the rest to reduce debts, he estimated.

But Marcus Osborn, a Scottsdale lobbyist representing Bankruptcy Trustees of Arizona, said the parties who could lose out if the bill becomes law include small landlords, various other small businesses and former spouses who might be deprived of child-support payments.

Most of the more than 130 parties that have noted their opposition to the bill on the Azleg. gov website are individuals, along with representatives of groups including the Arizona Free Enterprise Club and the Arizona Creditor Bar Association.

Supporters include various individuals and representatives of groups such as the Arizona Center for Economic Progress, the Arizona Council of Human Service Providers and Unidos US. 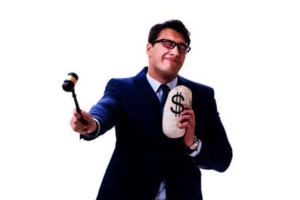 Russ Wiles, Arizona Republic, just wrote an article about destitute families losing the tax refunds (child tax credit and earned income tax credit) if they file for bankruptcy protection. Montana is the only other state that allows this money to be seized by the bankruptcy trustee. This money is desperately needed by families in order to buy necessities, pay rent, utilities or catch up on rent.  There is a bill pending in the Arizona Legislation to protect these funds – SB 1222. It has passed the Senate on a bipartisan vote and awaits a vote in the House.

So what is the problem? Bankruptcy Trustees are fighting hard to kill the bill. Why do they care?  Because the trustee takes 25% of whatever they seize from the families who have to file bankruptcy. See the Professional Fee Report from the Bankruptcy Court.  (Excerpts below)