by Bob Ciancola, Arizona attorney (reprinted with permission of the author)

Property which is pledged as collateral on a debt will sometimes be surrendered to the creditor if the debtor is unable to make payments. 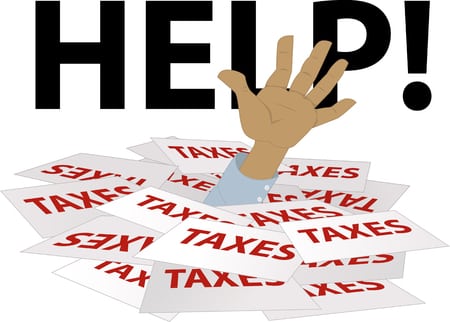 The rise in incidents of foreclosure of homeowner mortgages across the nation is but one aspect of this. Repossessions of cars and mobile homes are also common occurrences in the current economic environment. This article explores the income tax consequences to the borrower which may ensue from surrendering property to satisfy a debt. In general there are two tax aspects to consider: (1) recognition of gain or loss on the transaction and (2) recognition of cancellation of indebtedness (COD) income.

Gain or loss on sale.

Section 1001 of the Internal Revenue Code provides that upon a sale or exchange of property, the amount of gain recognized is the excess of the “amount realized” on the sale over the taxpayer’s adjusted basis in the property, and the amount of loss realized is the excess of the adjusted basis over the amount realized. In tax law, when a transaction occurs it is said to be “realized.” When the transaction affects taxable income by resulting in a taxable gain or deductible loss, it is said to be “recognized.” Whether the gain or loss is recognized depends on the type of property involved.

A person may have several residences but can have only one “principal” residence at a time. In general, in the case of property which has been used as the principal residence of a taxpayer for two of the past five years and has no period of “nonqualified use” gain may be excluded from income up to a maximum of $250,000 for a single taxpayer and $500,000 for a married couple. IRC 121. “Nonqualified use” means any period preceding the time the property was last used as the principal residence of the taxpayer and occurring after January 1, 2009. Any gain allocable to “nonqualified use” will not be eligible for the exclusion. Any gain not excluded is taxable as a capital gain (except for depreciation recapture if the property had been used as rental property and depreciation claimed. Loss on the sale is not deductible and cannot be used to offset capital gains.

Property, whether real or personal, used in a trade or business is accorded special tax treatment. Gains are treated as capital gains (except for depreciation recapture) and losses are treated as ordinary, fully deductible losses. Real estate held for rental is generally not considered used in a trade or business. Gains and losses from such property are capital in nature.

Gains from sale of property held for personal use – as a vacation or second home, a personal car, etc. – is capital gain. Losses are not recognized.

Whether debt is recourse or nonrecourse is generally determined by the terms of the note evidencing the debt. If the note provides that the borrower is not personally liable for repayment and the lender agrees to look only to the collateral, it is nonrecourse. If the borrower is personally liable for repayment it is recourse. In the case of real estate, Arizona has Arizona Anti-Deficiency Flow Chart (148 downloads) : one dealing with mortgage foreclosures and one dealing with trustee sales under a deed of trust. Under these statutes, the lender is generally barred from suing the borrower on a deficiency where the foreclosed or sold property fails to repay the lender for the full amount of the note. These statutes only apply to property used for residential purposes, of two and one-half acres or less, upon which is a one or two family structure and in the case of the mortgage foreclosure statute, only to acquisition indebtedness. Where the lender is barred from suing under these statutes, the debt would presumably be treated as nonrecourse for tax purposes, despite its terms, but surprisingly there is no direct authority for this in the Internal Revenue Code or regulations. Note that the anti-deficiency statutes do not apply to business property, apartment complexes, or any situation other than a foreclosure or trustee sale. Also they do not apply to mobile homes or other personal property. In addition, if funds are borrowed against a home and used for non-home purposes, the lender under a deed of trust may elect to forego the trustee sale and foreclose judicially, which would make this debt recourse debt.

Calculation of Gain or Loss.

Where the gain or loss is recognized under the above rules it is calculated by subtracting the property’s tax basis (generally, its cost, including improvements) from the “amount realized.” In the case of foreclosures or similar transactions where the lender takes back the property, in cases where the debt is recourse debt, the amount realized is the lower of (1) the amount of debt on the property less any amount for which the taxpayer remains personally liable, or (2) the fair market value of the property. When property is sold at a foreclosure sale, it is normally auctioned to the highest bidder. When that bidder turns out to be the debt holder, any amount bid at or below the outstanding loan amount will not require an exchange of cash. Therefore, to determine the amount realized, the usual practice is to look at the amount bid. That bid is, however, not necessarily the same as the fair market value. In a 1998 U.S. Tax Court case, the Court found that the bid amount was not indicative of the value of the property where the debt holder was the only bidder at the foreclosure sale and that it was not an arms-length transaction. It noted that the lender might have reasons for submitting a bid in excess of the property’s value, including not wanting to recognize a loss on its books. Because the IRS could not rebut the appraisal submitted by the taxpayer, the Court held that the appraised value, not the amount bid at the auction, was the fair market value and therefore the amount realized.

The Internal Revenue Code specifically provides that gross income subject to tax includes COD income. As a result, when a debt is forgiven by the lender in whole or in part, the forgiveness is generally subject to income tax. In the case of a mortgage foreclosure, or more typically in Arizona, a trustee’s sale under a deed of trust, the amount realized by the lender on the property may be less than the amount of the underlying debt. At this point, there are three aspects to consider: whether a debt has been forgiven, the amount of COD income required to be recognized, and whether the debtor qualifies for an exception to the COD recognition rule.

There are several exceptions to the COD income recognition rule. These are (1) where the loan is forgiven through bankruptcy; (2) where the taxpayer is insolvent; (3) where the loan is “qualified farm indebtedness;” (4) where the debt is “qualified real property business indebtedness”; or (5) where the debt is “qualified principal residence indebtedness.” The last exception was added by the Housing and Economic Recovery Act to cover events occurring before January 1, 2010 and extended three additional years by the Emergency Economic Stabilization Act of 2008. It applies only to a taxpayer’s principal residence and only to debt used in the acquisition of the property. It is limited to $2 million. In the case of a homeowner or other taxpayers, exceptions (1) and (2) may apply; in the case of business property, any of the above may apply. If an exception applies to business property, an offsetting reduction in “tax attributes” – such as net operating loss or tax basis of property – is required. In addition to the above, if the forgiveness of debt is of a tax-deductible item – such as interest on a personal residence – no COD income is recognized. Because these rules are complex, any taxpayer receiving a 1099 reporting COD income should see a qualified tax professional.

Joe, who is unmarried, purchases a house in Maricopa County which he uses as his principal residence. Joe paid $600,000 for the house and financed it with a deed of trust for $540,000 and $60,000 in cash. He later takes out a line of credit secured by a second deed of trust on which he borrows $80,000 to invest in a business. The line of credit, by its terms, is nonrecourse to Joe. Joe stops making payments on both loans in the fifth year and the house is sold in a Trustee’s sale for $400,000. Joe is treated as having sold the house for $620,000, because the debt is all considered nonrecourse. He is treated as having realized a gain of $20,000 ($620,000 debt less $600,000 basis). Joe is neither insolvent nor bankrupt. The gain is not covered by the qualified principal residence indebtedness exclusion because the extra $80,000 Joe borrowed was not used to buy the house, but the gain is still excludable from taxable income because it is less than $250,000 and covered by the principal residence exclusion. There is no COD income because the debt is nonrecourse.

The facts are the same except the property is held for rental and Joe never lives in it. He claimed $10,000 of depreciation on the building. He is treated as having realized a $30,000 capital gain ($620,000 nonrecourse debt less basis of $590,000). Joe is neither insolvent nor bankrupt so the gain is taxable. There is still no COD income.

Sue purchases a home for $800,000, which is financed by a first deed of trust securing an ARMS loan of $720,000. When Sue becomes unable to afford the payments following the adjustment, the lender agrees to reduce the principal balance to $670,000. Sue has $50,000 of COD income, regardless of whether the debt is recourse or nonrecourse.

Bob Ciancola is an attorney in Scottsdale practicing in business transactions, tax law and estate planning. He may be reached at 480 991-0803 or by email at bob@ciancolaw.com.

You may only submit 1 entry per day. If you need additional information contact Diane by calling 602-246-7106