OCWEN TO provide $2 billion in principal forgiveness relief to homeowners throughout the next three years as part of a settlement agreement.

OCWEN mistreated consumers and committed “systemic misconduct at every stage of the mortgage servicing process,” according to the Bureau. 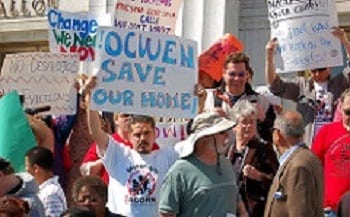 The mortgage servicer announced a settlement agreement with the CFPB and state officials resolving allegations it mistreated consumers and committed “systemic misconduct at every stage of the mortgage servicing process,” according to the Bureau.”

OCWEN was created in the late 1980s for the purpose of purchasing defaulted loans.  At that time their intent was to foreclose and normally become the owner of the property.

I can personally attest that they were horrible for the borrower to deal with.  Fast forward 25+ years and they are still abusing consumers.  Gee, what a surprise!!  As to the settlement – will they pay the $2 billion?  Given the history of the fines imposed on the other large lenders I am not holding my breath.  What are the chances of the settlement funds reaching those who were damaged?  Based on the Bank of America, et al, settlements some of those abused borrowers may receive a few dollars.  But, those funds are more of an insult for the pain and suffering the lenders force the borrowers to endure.

Do I sound impassioned about this issue?  Most definitely.   On a daily basis I hear about the damage done by these greedy lenders and servicers. They may be completely disorganized, or (this is my fear) they know exactly what they are doing and their goal is pure greed – to make as much money as possible, not matter the cost to the homeowner.
Will the borrowers ever recover emotionally?  We can only hope so.
How Can I Help You?

47% of Home Buyers Do Not Compare Mortgage Rates