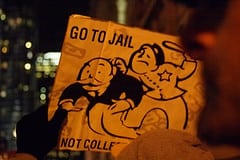 In re Kenny G. Enterprises  16-55007 (9th Cir 7/26/2017)  Kenneth Gharib refused to comply with a bankruptcy court order to turn over $1,420,000 belonging to a chapter 7 estate.  The judge imposed sanctions for the contempt: civil contempt sanctions of $1,420,000, $1,000 a day until he complied, plus incarceration until he complied (that was May of 2015 and as of this writing he is still in prison).  The District Court of California affirmed the order, except the $1,000 a day. The 9th Circuit reverses on the issue of daily sanctions, finding that such daily sanction is permitted if it is “properly coercive” to comply with the turnover order, but not if it becomes punitive.

Such sanctions include incarceration for more than two years

In the face of a § 542 violation the bankruptcy court may invoke its contempt power under § 105, which allows the court to “issue any order, process, or judgment that is necessary or appropriate to carry out the provisions of this title.” 11 U.S.C . § 105(a)  Such sanctions include incarceration for more than two years.

Trying to ignore or play games in bankruptcy will result in losing more than a home, business or money.  It can result in losing your freedom by being sentenced to prison (not great on your resume’).  So many people believe that filing for bankruptcy is like playing “hide and seek”.  If you are really good at hiding you will win.  Mr. Kenneth Gharib now knows better.  He has been in prison for two years and counting.

The Only 3 Times Filing Bankruptcy Is Worth It

Mortgage Lenders & Servicers Are Not Your Friend

The Nightmare of Hiring the Wrong Attorney Based on Price